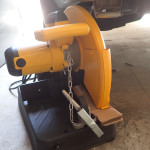 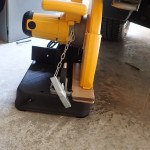 Talking about careless and….. well backing up way to far!  LOL 🙂  This was really close…. but yeah I had plenty of room!  🙂

Anyway…. this chop saw seemed very reasonable so…. well I purchased it.  (Amazon also had a $20 off coupon on all Dewalt stuff…. you can click the link.)  It was a DEWALT D28710 14-Inch Abrasive Chop Saw

.  I do wish they had some sort of stand for a Bosch 9″ Angle Grinder

…. but all I found was this…. a grinder stand

…. but is looks dangerous and got bad reviews.  LOL  🙂 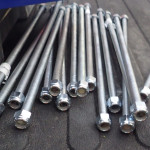 -The best way was to unscrew a bolt after you cut the all-thread.  Which really does not help when you have 6′ pieces!  LOL  🙂  But I understand the theory.  Even 3′ with a little nut it a pain.
*The problem was the cuts or mangled threads still were to strong to allow a nut to get off the thread.

-Grinding also did not help…. it was very hard to get the line straight.  The cut has to be straight to get the bolt on.
*I was actually using a grinder then used my impact wrench with a deep socket to “get” a nut on. But this technique was very time consuming.

-On the forum they suggested using a Variable Speed Bench Grinder

.
*I used my angle grinder and it just seemed to constantly mess up threads?  Maybe a bench grinder is better?

-My revised best technique! Use a chop saw…. then a tap and die set to fix the problems.
*When using the chop saw…. it would cut the all-thread straight and if you go slow it would not cause any issues. But really who waits around? 🙂 I had to fix a couple per 6′ length. I also just used the tap or die in my hand…. so no big deal.

Let me know how you get this done…. I believe this process/technique varies with the size of all-thread.  So this may not work with smaller…. but larger would probably be fine?