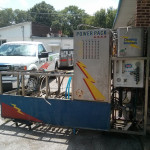 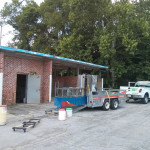 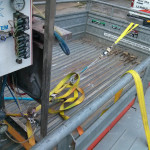 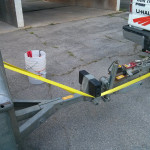 So I moved a Jim Coleman Power Pack by myself?  But I have not received my metal or patch yet?  🙂  How come when you need help no one is around?  LOL  🙂 I actually didn’t ask anyone like a retard…. I remembered reading a post on autocareforum.com where someone said Coleman basically was designing the unit to require professionals to install and move it. I thought after reading his comment…. Not only is this guy wrong but I could move the stand myself? Well I guess I actually can?

The secret was removing the pump sled things.  It was still heavy though (on one side)…. but when I moved this from this location and drove it somewhere else it got easier…. at the other location I had help to put it in another truck. It was easy with two people to lift the stand without the pumps. 🙂

This technique of removing the pumps to move the unit will also work for the Ginsan Ultra or Ultimate Compact System. I have actually not put my stand in a truck yet. But the Ginsan unit was actually lighter I believe?

Update: I went to visit Bob and he had sold his PDQ and Unitec. He is a great guy…. Wish I wanted the PDQ it really was a great deal. Especially from Bob. 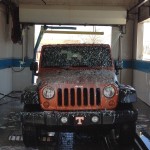 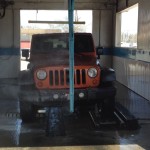 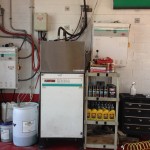 I have purchased stuff from this guy before and he is a super nice guy…. he also sells great stuff. 🙂 He is selling a 1999 Model PDQ Laser Wash 4000 with dryer. Unit was updated in 2009 to add colorshine. Unit is still in use near Knoxville, Tennessee. He said he has spare parts, will help remove and has a forklift! That alone is worth an extra 1-2k. He might even bring it to your location if your close. 🙂 He is asking 7k and he would negotiate. He is just in the oil business and is expanding and needs the bay.

I watched this whole video…. and I agree customers might notice nicer signs. But unless I missed something the 360 and the 4000 are the exact same right? No notable improvements? All the differences might not even be good right? Chain driven? Removing the boom? Plus removing the T-bar? This at least keeps the car remotely in a straight line?

The wheels have to be inflated the same so the unit runs correctly…. but the chain is basically the same? Unless it drags the unit? 🙂 You would have tire ware still and eventually the unit would misread I would think? The flexing of the chemical lines I would think would have to be worse on the chain setup? But I understand the boom setup would be more expensive and is uglier…. I guess? The T-bar is the worse idea… unless the new unit comes with rails? Also the virtual treadle I think it a gimmick…. but it would be good to avoid a switch I guess? But you will end up putting a speed bump in for your customers I would think?

Also looks like there example in the video has additional Laser 4000 dryers? Maybe on-board dryers are not that great…. why knows? (But I am not a PDQ expert.) You really don’t need great dryers or any dryers if you have good ro I would think? Looks like pdq uses 8020.net components for there stands? I have never seen one mounted from the ground though.
http://www.pdqinc.com/images/laserwash-g5/lg/g5-aluminum-frame.jpg

I think the reason there are no real improvements noted in the video between the two units is because they sold upgrades to the older Laser 4000?  I’m not sure I was just surprised with the lack of improvement noted on the video.  I would think something like “now with 6 arms” or rotating nozzles?  Higher pressure?  Can clean a car slower or faster?  Uses 10x the chemical as the older Laser 4000?  JK I really do not care….  I think the arm looks better and that is important.  But you can probably purchase a retro fit for that also?  You would be surprised with what an operator thinks is important and what a customer even notices.

I do think the remote operation is unique?  But someone sells an add on for the PDQ 4000?  Maybe PDQ?  🙂 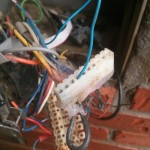 One of my functions was not working and I wanted to see if the wire to the equipment room worked.

If your good you can tell for sure what timer I am NOT using.  🙂  Hint I wouldn’t use an IDX timer.  Another hint…. It is not a trick…. It is not the vendor that produces both setups.

I would offer you 215 each and would pay the shipping. You can Contact me at 919-724-2130 anytime if you would want to sell them or talk about them thanks. Thanks. Thomas Lunsford

Just a note to save you time getting a quote…. Also I will give you $220 each for any multi-function vacuum…. Take that Thomas!  🙂  Also his email and phone number is all over the interweb so one more place will not kill him…. right?  🙂