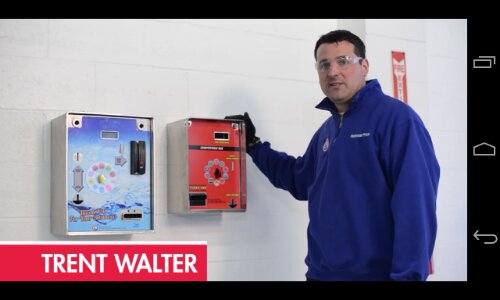 I understand this looks bad because I hate national pride…. just because they don’t give support after the purchase of meter boxes. Nothing kool or important! 🙂

But I have had plenty of meter boxes which have been broken into… the content of a cheap meter box which there comparing there $2000-4000 meter box to? HAS NOTHING OF VALUE IN IT…. UNLESS 25 CENTS IS WORTH IT FOR THE AVERAGE PERSON? PLUS IT SHOULD NEVER BE SUGGESTED OTHERWISE!  I understand the top screw mounts probably help just a little!  🙂  Even on tin foil boxes! But to say that some one has valuable components in there is ridiculous and just a nasty sales ploy and no one should do business with them. Besides the fact they couldn’t be bothered to help a CUSTOMER!  What is wrong with car wash companies?

Plus I have seen videos similar to this before. They should have hired someone to open the box and show how much trouble it was. Giving up that fast gives the illusion there product is a pos. If Trent Walker couldn’t last more then 30 seconds that’s fine…. What are they going to do resell the meter box? 🙂

Oh and Trent Walker actually says “you have thousands of dollars of components in there”. While I am assuming discussing a meter box. WOW multiple thousands!? 🙂 Would that be considered a lie?

But they are discussing a meter box with a bill acceptor…. Which does hold money. Just a note for a thief… If you see a car wash with crappy boxes and a bill acceptor in it. Run away! What national pride omitted is the operator has cameras and more then likely an alarm when you hit it. “Not FREE MONEY” like there implying…. With the Vegas payout sound effect.

I need to have no shame also because I have greed and want money! I need a sign “Don’t scratch your car with dangerous brushes from express tunnels you can’t inspect! Come to a self serve!”. Its to long though …. But my statement is at least true! Your depending on the employees there to check the brushes…. Scarry! At a self serve you cam do it yourself!