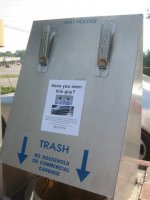 Well, today I printed up some of these signs, asking if anyone has seen this guy.  Also, I got some pictures developed at Sams to give to the detective and to ask people around town.  Well, I gave the pictures to my Dad to show some people and the first person knew exactly where he lived.  My Dad told me the address and I called the Police.  Unbelievable, I actually am very lucky so far.

When I knew the guys address, I could not resist driving by his house and taking a picture.  I bet this is a surprise to everyone that I wanted to take a picture. 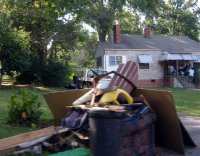 Apparently, I was not very discrete about taking these pictures; of course I did not care either. 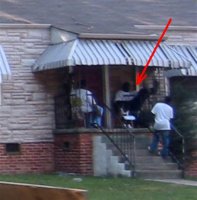 After these pictures he for some reason decided to follow me.  I stopped at a stop sign and noticed him following me.  Like a moron I waited for him and let him pull up besides me.  He was with his wife and he started asking why I was taking pictures.  I told him because he took my garbage can lid.  He became very nice and the first thing he asked was how I found him.  I told him someone ratted him out.  He then said that the detective just left his house.  He was going to pick the lid up at the scrap yard.  I said they better have it because the lid would cost around $500 to replace.  His wife freaked out and he started apologizing and got out of his truck.  He talked about how great and ethical he is.  About how he has five kids.  I responded with a “so the lid cost $500”.  I told him I was afraid that he would come back to get the others.  He showed me the salvage receipt for 24 pounds of aluminum he got $10.40.  He kind of bitched about not having that much money to get it back.  So?  His wife said she could get it out of the bank.  I said “I hope to god the salvage place did not melt it down.”  He explained the process and I explained I needed it back now and I did not care that he needed gas money.

He actually ran out of gas across the street from the car wash when he stole the lid.  During the conversation he said he knew I had security cameras and was not surprised he got caught.  Also, that he noticed the garbage lid was loose when he was vacuuming out his truck a couple days ago.  When he needed gas money he stole the lid.

He was actually wearing the exact same clothing that he had on when he took the lid.  He looked exactly like the pictures from yesterday.  E04

5 Replies to “This guy stole my garbage can lid – Update”