I measured the temperature today to compare tomorrow after the fan has been running.  The Weep Mizer which the probe in outside a couple of inches from the roof said 95.  Then the thermometer about a foot or two from the roof said it was 88 inside.  I just know it was very hot today especially on the roof. 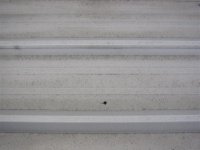 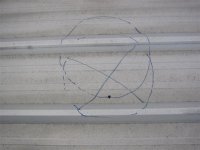 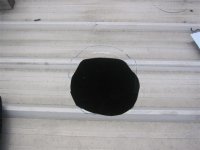 I drilled a hole from the inside of the equipment room.  Then I marked my plan of attack. 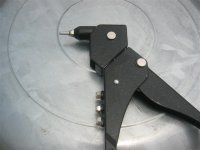 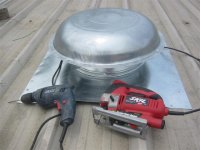 Here are some of my crappy tools I used to mount the fan.  My crappy riveter which I got from Harbor Freight.  I had problems using it to rivet.  But it could be me because I have not riveted anything sense high school.  Also, my Skil saw is crappy or I can not use it correctly either.  It dropped three blades into the equipment room.  The chuck thing is bad I guess.  Also, I broke one blade myself.  My cool GMC drill worked flawlessly but it also has chuck problems sometimes.  I only buy the best drills.  Actually my DeWalt has two dead batteries. 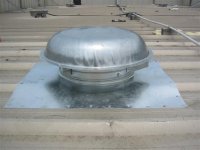 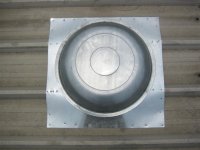 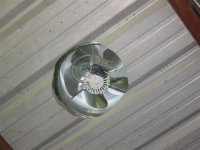 Fan installed and riveted down. 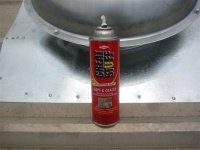 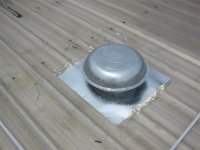 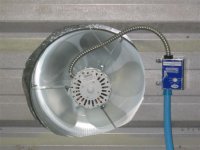 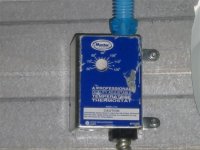 I hooked the fan up to the power and everything worked the first time.  I think that it will really make a difference.  But I will be able to tell tomorrow.

It was funny as soon as I wired the fan to work.  I saw a wasp in the equipment room.  The fan turned on and the wasp flew directly into the fan and got killed.